Ok, so it’s been quite some time since I’ve posted.  I’ve been a busy girl… sick too.  I hate when the entire family gets sick, then passes it around like a white elephant gift at a bad Christmas party. Ha ha ha No body really wants the gift, but they take it and pass it along just to play nice.

My busy week started with a run to the horrible place that sucks the life from you before you even get into the parking lot.  Yup, Wal Mart… and seriously… I have one checker that I LOVE, she’s the best.  things scan right, if they don’t she fixes it, and she’s friendly, and perceptive, and efficient, and FAST!!! She’s the only bright spot in the entire place… Trust me, I know, I’ve looked! hahaha Anyways, I ran out of powdered sugar to make Butter cream frosting, and so I had to run there to grab some ($64 later, I was finally checking out) and as I walked back to my car, this is what was parked next to me…. 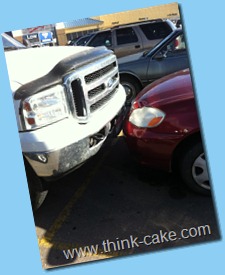 Ok, so forgive me a cruel chuckle… I know that the truck was there second as the red car was there when I went into the store.  I’m guessing Mr. Ford truck here was either being funny, or is older than dirt and has no depth perception.  either way, funny…. not if it was my car… but funny…. hahahaha… I’m sure the truck is not hurting anything… but that’s a close park job… I wanted to write on a piece of paper “who taught you to park? Stevie Wonder?”  Mean, funny, and totally appropriate! ha ha ha Ok, so it made me giggle (obviously) and I just had to share.

So after I got my sugar, It was time to bake.  I’ve told you all that I’m seriously addicted to Pinterest.  It’s a time warp for me…. I sit down to see if there is anything new, and three hours later, I’m wondering what just happened! hahahaha So I found a recipe for Peanut butter muffins with peanut butter and chocolate chips!  who can pass that up??  So laptop and 5 year old in tow, I went to the kitchen…. 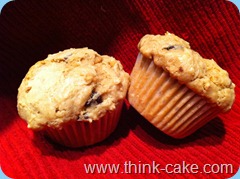 Evan and I whipped these up in no time, and they are sooo delish!I was impressed.  Even my super critical mother loved them… and she’s hard to please as far as baking goes.  hahahah I love her for every criticism, it makes me better at what I do, but when she takes a bite and closes her eyes and says “MMmmmmm…..”  you know you’ve hit the mark.

Ok, so I was side tracked, I had a cake that I needed to make… geeze… get on it…. oh well, I guess I had time to make it in the morning… it was for a baby shower after all and the start time was not until 2.  So…. Yeah, I decided to bake it in the morning.

When what to my wondering eyes should appear….???? 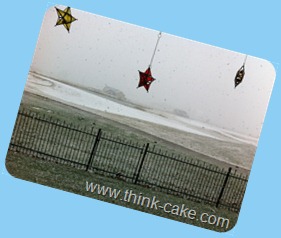 Ok, Focus… it’s cake time.  My assignment was… jungle.  That’s it, that’s all I got… a jungle baby shower… that’s what I had to work with.  Simple, and cute… ok… here it goes: 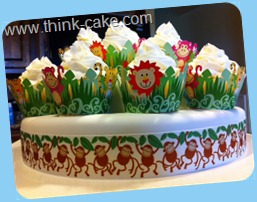 Generally, I like it. ha ha ha  A dozen cupcakes on top of a 12” and 8” stacked cake.  They wanted simple, so I think I achieved that.

Now it’s time to clean my house and get the laundry started (I think I have Mt. Everest growing in my closet) .  I say “started” because I’m sure I’ll never finish it!!

Evan and I put up the 4 Christmas trees that will serve our house this season.  2 in the living room, one in the playroom and one in my master bedroom.  What can I say? I LVE CHRISTMAS.

Thanks for reading… and I promise these will get more interesting as I get a little more time to be creative.  As for now, I’m off to watch RIO with my boy and drink hot cocoa and maybe stamp a bit with my Pal.  It’s been so long since I’ve made cards that I think I may have forgotten how.  Hopefully it’s like riding a bike…. I have a lot of projects to pick up where I left off at.  ha ha ha

See ya all soon!

Email ThisBlogThis!Share to TwitterShare to FacebookShare to Pinterest
Labels: It's Been A While...