Yeah, I know it's the wrong day for that song... but it just sorta feels that way.

I have decided that I need to post more... so I'm going to try and use this Blog as more of a daily journal than just a "Posting Projects" sort of an outlet. So, here it goes:

I have been busy lately with Pinterest!!! OMG, if you haven't signed up, you absolutely MUST! I'll tell you right now, it is so addictive that your whole world becomes consumed with what is going on there. With over a thousand pins an hour, it's no wonder I can't pull myself away. Pinterest is like a virtual bullitain board(s) full of ideas like recipies, crafts, photography, fashion, and the all out bizzar! I absolutely adore it! I not only look at it on my computer, but I got the app too! Have someone invite you and give it a try.

So, the above being mentioned, I have found a few projects that I just HAD to do. So I got myself a big bag of glue sticks, a few boxes of crayons, and here's the first thing I made: 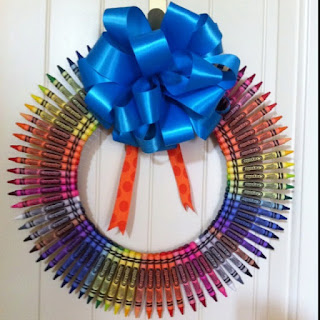 I think that it came out pretty well.... I believe I'll gift it to Evan's preschool teacher for Christmas... IF I can wait that long.

I have a few more projects in the works... but one of them is taking FOREVER to make... so we'll see IF I ever finish it... I worked on it for four hours yesterday and I'm not anywhere near finishing it...

I am nearly finished with my Christmas shopping!!! Woot Woot! I have saved the hardest for last, my Mother-in-law, my Hubby and my Son.

Evan's wants EVERYTHING for Christmas this year, literally! Every commertial he sees and every store he enters he is bitten by the Christmas Gimme Bug and declaires; "Momma, I want that for my Christmas!" Normally, I would think this is cute behavior, I mean his diction is outstanding!!! However, it's getting old, FAST! For those of you who know my son, you will know that if one of those items does not, in fact, show up here on "My Christmas," there will be Hell to pay! Oh yeah, he'll cry and wonder what he did that was so bad that Santa or Mommy and Daddy didn't think he deserved that particular toy. It's a heartbreaking site to see, and quite difficult to explain to him that it is not because he was "bad" or "not good" that he didn't receive that specific toy. Evan is "special" to say the least, and his abilities in the memory department are nothing short of phenominal.

Example? OK. My friend Jacqui has 2 children, both 5 years old. When they decide to fight or argue over a specific toy, she takes it away from them and puts it out of sight. Sometime later she returns the toy. "Sometime later" is a loose term; it could mean a few hours, a few days, or 4 months later when she happens upon it in her closet and wonders when the heck that toy gaind the magical ability to jump onto the top shelf along with that scarf she'd been missing. The children don't seem to ever be the wiser though, they may remember that toy and ponder where it has been the last few months, or they may think that it is just a new toy to add to the collection.

Evan? Nope. NOT THAT WAY. (Strangely, this is one of the things I do LOVE about him though.)

His inventory of the over 60 Thomas the train engines, 40 Monster Jam trucks and 400 bazillion hot wheels cars is nothing short of astonishing!!! If I were to take a specific one away and hide it (oh, and trust me I have, just to test this theory) he will notice within minutes and melt. Not some little "Oh no, Henry is missing!" (gasp) type of melt.... but that crocodile tears and sit in the middle of the floor helplessly wike someone kidnapped his Grandmother type of melt. "Momma, Henry is missing. He was here last night, and now he's gone. I'll NEVER find him. Where is he?" Spoken with sheer panic in his voice.

I would say it's a great thing, I mean, if i could do that with a lot of things in my life... wow! But when we are rushed and leaving the house and he needs a specific train to accompany us.... it's nothing short of inferiorating! Ugh!

Now, the other half of that story, Evan is a MAN as well. Although he has a perfect running inventory of every item he has ever (EVER) received, he also has a severe case of testosterone poisoning! Oh yeah, you know what it is. It's a disease that ALL men are born with, but usually doesn't kick in until well after puberty. Evan's case is so severe that I wonder if him and his father could ever survive without me. It's that disease where they open the rifrigerator door and ask where the milk is... like it doesn't have it's own home in there. Well Evan can take a toy, play with it, set it on the coffee table (the singular item on that table) then go into shock that said toy is MISSING! AAAAAHHHHHHHHHH!!!!!!!

I'm not exadurating here, he can literally set his train ON the train tracks and then FREAK OUT that he cannot find it 30 seconds later! It's funny and frusterating all at once. 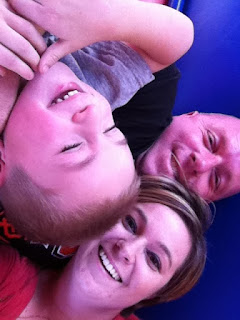 What would I ever do without them? I'd be so lost I would have to throw an Evan-esk fit while sitting in the middle of the living room floor with corcodile tears in my eyes wondering what just happened. Ha ha ha!
- October 23, 2011