Talk about a busy week!!  My intention was to try and write on here every other day; not happening this week! ha ha ha Let me re-cap.
We FINALLY closed on a little house for my mother-in-law to move into.  It's about 1200 sq ft, and has a smaller yard so its a lot less for her to have to take care of.... it's super cute and just right for her!!  I spent the first part of my day over there on Tuesday making sure it was all clean for her.... scrubbing other people's funk is sooo not my idea of fun.  But i had to get it done.  So i kicked up the volume on my iPhone and rocked out and cleaned every inch of the place!  I shampooed the carpets (twice) and I think it all came out just great!  Smells fresh and clean in there and, after the movers and my husband helped all day yesterday, she was able to spend her first night in her new house! Yeay! 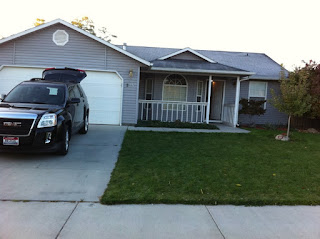 So, after that... I had a tun of Dr.'s appts and dentist visits.  seems like they always show up all at once right?  I think it's a conspiracy..."if we all have them come at the same time, we can ruin their Christmas because that's about when we'll send all the bills and statements for their visits! Bwa ha ha ha!"  Must be run by a Grinch type corporation. ha ha ha
Well, Thursday brought with it a Halloween party for my Pre-schooler.  Being that he is VERY particular about what he wears and not a costume or dress up sort of kid, I was shocked (SHOCKED) that he wanted to be a pirate!  So, the morning of the party came and it was time to dress up... begin biting nails... here's the moment for the meltdown...waiting...waiting..... AAAAARRRRRggggghhhhhhh!!!!!!!!
Yup, my little man was all about it this year!  He was excited to go to pre-school and be a pirate!  Yeay!
So, we made our trek to the school and began our party.  Evan played musical chairs (and didn't freak out when he didn't end up in a chair near the end), went trick-or-treating, and even decorated a treat bag.  Color me shocked!!! BUT...... my little man, when faced with a bucket of water and a fer green apples, decided that bobbing for apples was NOT on the list of things he was going to do.  hey, ya can't win 'em all right?  Ha ha ha 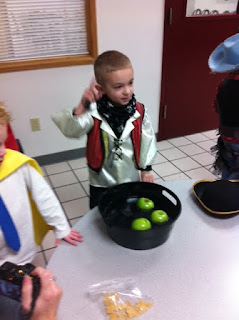 He took off his hat, stared into the pail, and said, "I don't wanna use my mouth to get an apple, that's gross!" Ha ha ha   How can you not love this kid?!?!??! i told him he didn't have to bob for apples, and he said good, he just wanted to use his fingers.
Next it was snack time, so Evan passed out the cupcakes that we made.  Just simple chocolate cupcakes with white chocolate skulls and little skeleton picks.  Nothing over the top, but they got the job done.  Especially since I forgot that I signed up to make cupcakes until Wednesday night! Gasp!! Ha ha ha
﻿ 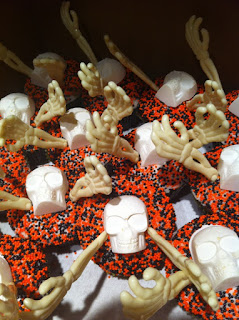 The other picture you see here are treats that I found on pinterest. 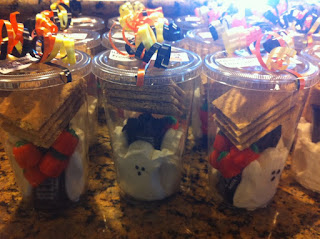 Yup, I actually made something that I found on there, AGAIN!! ha ha ha  These are little S'mores cups.  super easy, just some graham crackers, Peeps ghosts, Hershey's bars, and I added some candy pumpkins for color.  I put a little tag on the top with a pirate that says "Happy Halloween from Evan!"
Today I have some chocolate suckers to make, cookies, and a baby shower cake.  So I'll be busy yet again.  Saturday brings my birthday celebration.  I'm going to be the big 30, we decided to order the UFC fights and have a few friends over.  I'm going to set up a dessert buffet, so standby for pictures of that.  However.... I'm totally disappointed.  I wanted to get the UFC fights because one of my fave fighters was listed as the main event, GSP!  Apparently, despite me thinking that he is totally superhuman, he tore his MCL and can't fight.  Ugh!  Head slap!  What a let down.... not only is he not the super hero I thought he was, but now I don't even get to watch him defend his belt on my birthday! GGrrrrrr.... i ought to write him a letter! 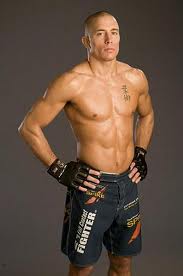