Ok, so while most of you seem to be thinking Coco, flappers, and beads.... I'm thinking...... Steamboat willie!!!!!! Yeah!!!! 1920 is when Walt Disney came up with Steamboat Willie later known as Mickey Mouse..... call it a generation gap, but I just didn't think of flappers when I thought of 1920! hahahahah ok, ok, ok... I did a little.... but I didn't want to make a card that looks like everyone elses' card (even though yours is super awesome Gloria). So here's Willie: 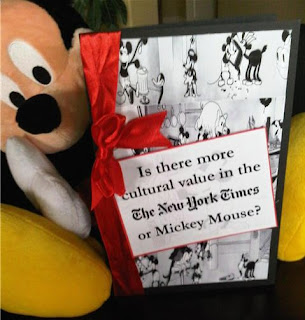 I had to putt out the modern Mickey mouse plush to hold my card for the photo.... it was a must! ha ha ha Anyways, the comic strip in the background of the card is storyboard I found online from the Steamboat Willie cartoon, and behind the sentiment I watermarked the 1920's image of Steamboat Willie himself! It's kinda hard to see in the pic, but look really closely and you can make him out. I just thought that the sentiment was funny.... it is on red card stock and lifted up on pop dots (man I love those things!!!). Then I topped it off with a big red satin ribbon, because what's a card without the ribbon? ha ha ha